Alpha Monster Advanced Review: Why This Supplement May Not Be Your Best Choice

Alpha Monster Advanced is a dietary supplement that has gained some attention recently.

The product is promoted as a natural testosterone booster that helps to improve the balance in male sex and steroid hormones.

The expectation behind such a supplement is improvements in the gym and on the track, the ability to reduce body fat percentage faster, and a significant increase in the rate at which muscle mass develops.

The only problem, however, is that the ingredients in this supplement do not seem to match up to the claims made. At least when looking at the current scientific evidence.

Dietary supplements have become a common product used by people in the modern day. This industry is estimated to reach about $210.3 billion by the year 2026 – and this only accounts for data in the United States.

The sports supplement section in this industry is also expected to grow the fastest during this time period. With thousands of supplements on the market promoted to help athletes improve their performance on the track, and to assist bodybuilders in increasing their muscle mass.

The problem, however, is that many of these products are all talk and delivers no positive results.

Today, we are going to take a closer look at what Alpha Monster Advanced is. We will consider user reviews, take a look at the ingredients that the manufacturer decided to include in the product, and make a conclusion in terms of whether or not you should give the supplement a try.

Do You Need A Testosterone Booster?

Testosterone is a male sex hormone, and while there are some of these hormones in a woman’s body, they are much more abundant in men. The hormone has a role to play in many parts of the human body. Some of the lesser known important functions include the regulation of bone density and even cognitive function.

The hormone is most commonly associated with terms like “alpha male,” and let’s not forget “masculinity.” This is because testosterone helps men experience physical strength that allows them to pick up heavy weights.

The hormone also plays a role in the development of muscle tissue and with enough testosterone in the body, fat distribution is improved, and a man is less likely to become obese.

Not everyone can really benefit from a testosterone booster. Sure, the ingredients in some of these supplements may help to boost energy levels during a physical workout and could even give muscles some added pump to help them grow faster.

The testosterone boosting effects of such a supplement, however, would only be useful for a man with a hormone level that is lower than what is considered normal.

Natural levels of testosterone start to decline when a man turns 30. At this point, there is an estimated 1% drop in testosterone production each year. This, however, is usually not considered a significant enough reduction in the hormone to yield signs of andropause, a term that refers to testosterone deficiency in the male body.

There are some cases where a man may experience a faster decline in their testosterone.

In such a case, the following symptoms may start to develop:

What Is Alpha Monster Advanced?

Alpha Monster Advanced is a dietary supplement that is promoted as a testosterone booster mainly. The manufacturer behind the supplement promises men that they will experience a surge in the production of their testosterone without the need for any conventional treatments, such as hormone replacement therapy.

This certainly seems like a positive factor, as hormone replacement therapy is known to cause a number of adverse effects in the male body, which is why a lot of men prefer not to undergo this type of treatment.

The supplement is primarily promoted to men who are experiencing three very specific issues in their life at the moment:

The main audience for this supplement is men over the age of 30, as this is the time when testosterone starts to decline, as mentioned previously. The manufacturer behind Alpha Monster Advanced claims that their unique proprietary blend of natural extracts can help to balance hormones in the male body effectively.

The result of this improved hormonal balance is an increase in testosterone.

While a lot of Alpha Monster Advanced reviews have been published on the internet since its launch, it does seem like the product’s official website has been taken offline recently.

This most likely means that the product is no longer being produced or distributed, and it was likely taken off the market. We could not find any further details in order to determine why the manufacturer might have decided to stop selling the supplement, but it could be due to a number of possible reasons.

A quick look at details about Alpha Monster Advanced and you are presented with quite a lot of claims and promises. The supplement promises to help men experience a significant increase in the amount of bioavailable testosterone that is circulating through their bodies.

Apart from this primary benefit or claim that the manufacturer of this particular product makes, a closer look at the bottle also gives you the following promises:

With these claims in mind, it is important to dig deeper into the supplement, take a look at what the active ingredients are, and consider if there is any scientific evidence to actually back up all of the promises that the brand has made.

What Are The Drawbacks Of Alpha Monster Advanced?

Looking at potential drawbacks and possible side-effects when it comes to considering to use a supplement like Alpha Monster Advanced is crucial.

Even though these supplements are primarily made from natural plant extracts and often include added vitamins and minerals, it is important to note that this does not necessarily mean you cannot experience any adverse effects while using the supplement.

First of all, it is important to note that some people who used the supplement reported heart palpitations as a side-effect. Most of these reviewers stopped using the product once these side-effects developed.

There are a few who continued to use the supplement and noted that the heart palpitations went away after a few days of use. This could be due to their bodies getting acquainted with the ingredients included in the supplement.

Another important factor that we need to consider here is the possibility of experiencing an allergic reaction to some of the ingredients included in the supplement.

If you are interested in using the product, always be sure to take a good look at the ingredients and ensure you do not have allergies to any of them.

It would also be a good idea to consider potential interactions with any prescription or even over-the-counter drugs that you are currently taking.

There is one more drawback that comes to mind here. The official website that represented Alpha Monster Advanced has been taken offline recently.

We did find that there are some vendors on Amazon and other marketplaces selling the supplement, but it does not seem like these are the official company behind the product. This might mean that the supplement was taken off the market.

It is important to consider this as it is usually advised to only buy from a reputable company when it comes to performance-enhancing supplements, especially those that may interact with your hormones.

The formula behind the Alpha Monster Advanced supplement is a proprietary blend. This means that a single dose is provided, instead of giving the user details of individual doses.

This is a definite drawback when it comes to looking at the ingredients, especially when comparing them to scientific studies. You would need to know how much of a particular ingredient you are putting into your body to see if it could actually yield effective results.

And if you could be at risk of possible side-effects due to overdosing.

The active ingredients that the company included in this formula consist of the following:

A list of “other ingredients” are also shared on the label of the product, which consists of the following:

While there are some studies behind certain ingredients that form part of the Flow Viv MAX-TEXT Blend. The evidence related to the claims that have been made by the manufacturer is significantly limited at the moment.

Improvements in recovery time, for example, may be achieved with the use of this product, but it may not actually cause the “surge” in testosterone production as the manufacturer claims on the bottle.

Furthermore, another concerning factor that is noted here is that there are a lot of added inactive ingredients. This means that the manufacturer may likely be using some filler ingredients in their formula. Which is definitely considered a negative factor when looking at any type of natural dietary supplement.

The Alternative To Alpha Monster Advanced 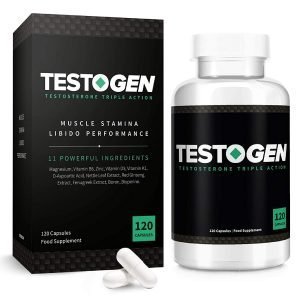 Due to the lack of scientific evidence for the primary ingredients used in Alpha Monster Advanced, combined with the mixed opinions and reviews from previous users, many people are looking for an alternative.

There are thousands of different supplements on the market that focuses on boosting testosterone levels in the male body.

After a lot of research and consideration, we highly recommend TestoGen as a great alternative to Alpha Monster Advanced. This supplement is made with a range of ingredients. These ingredients have each been scientifically proven to assist in enhancing overall male performance.

The supplement may also help to balance hormones in the user’s body, which may lead to an increase in the bioavailability of testosterone. In addition to boosting testosterone, there are other potential benefits that men can expect when they decide to give TestoGen a try.

The ingredients that have been included in the TestoGen proprietary blend include:

Apart from these ingredients, TestoGen also includes an active ingredient called Bioperine. This is an extract from black pepper that helps to improve the absorption of the other botanic extracts that are added to the supplement’s formula.

Testosterone plays a crucial role in a man’s body, promoting physical strength, athletic performance, muscle growth, and more. There are many methods that can be used to help increase levels of this hormone in the male body.

While testosterone replacement therapy is a popular treatment, the side-effects are unpleasant. Alpha Monster Advanced is promoted as an alternative to hormone therapy.

But it does not seem to produce the results that the manufacturer promises. We did find that an alternative, known as TestoGen. It yields effective results, making this an excellent alternative to both Alpha Monster Advanced and conventional treatments.

Check our list of the BEST fat burners on the market.

If you want to get ripped, look lean and shortcut your transformation then these fat burners will help you get there faster!